The Guy Who Had that Sex Scam

The Guy who Had that Sex Scam

For five wondrous years of my life I lived in a haven, a Xanadu if you will.  A mythical land of milk and honey.  A mecca for the enlightened.  A beautiful, golden cesspool know by Angelenos as K-Town.

Or Koreatown for those who don't prefer stupid abbreviations.

And in case you didn't catch it, I was being saracastic in my description of the place.  Ya know, more like Xana-Dont!  Huh?  Huh?  No?  Fine.  I figured it was a dumb joke.

First off, K-Town isn't that bad.  It is centrally located, has lots of intriguing places to eat, and the "K" might as well stand for karaoke.

It's a bit bad too though.  Regardless that people I personally know were mugged there, or that I saw multiple drug deals go down, or that I had to side-step human feces on more than one occasion (and one occasion should be one too many.), my main happiness in no longer residing there is that I'm no longer neighbors with the guy who had that sex scam.  Actually, he had the idea for the scam, more than the actual scam.

Imagine if you a will, a man who looks like Steve Buscemi.  And not in a "Oh, you look like a notable and respected actor," but more like "You actually look like one of the creepy characters he's portrayed."

Fake Buscemi, or F.B. (which is how I'll refer to him from here on) worked in telemarketing.  I know this because any time I had to go the back of the apartment house to do laundry or throw trash away F.B. was out there with some can or 40 oz bottle of whatever malt liquor he got his hands on that day.

The amazing thing about F.B. is that he was ageless.  If he were my age, or 50, or anywhere in between, I wouldn't be surprised.  I suppose kind of like Real Buscemi for most of his career.

This idea is this person.  This person is Fake Buscemi.

I got along well enough with F.B..  I'd listen to his non sequitur rants.  And I wouldn't immediately dismiss his half-idea of forming a class-action lawsuit against the Department of Water.

I guess I'm mellow enough, and maybe more importantly, I never complained that the studio he shared always smelled and since they kept the door open because they didn't have AC, the hot odor of human filth would waft out into the common hallway.

Here's how it works:

You take out an ad in LA Weekly or some other local paper claiming that you are a single man who has just won the lottery.  The sad irony though is that you are single and wish you had a girl with whom you could share your life and new found millions, and for $50 you'll interview them as your prospective wife.  (This is a paraphrase that's probably a little more elegant than the way he put it.)

As a result now, all these stupid, money-hungry bitches are gonna start responding, and then when they come over here, we get their $50.  And we get to fuck them. (This is a paraphrase that's actually pretty accurate to his description.)

There's a lot wrong with this plan.  The most obvious of which is the moral aspect, but being that is so inherently obvious, I didn't even comment on it.  I figured we must be discussing this ironically or just as hypothetical.

So I throw out, "Wouldn't any woman who comes to our apartment realize immediately that neither one of us just won the lottery?...If you're going to be getting $50 a head (no pun intended) might it be worth your investment to spend like even $100 on a hotel.  After your 3rd girl you'd be making profit, not to mention, you'll have just had sex for free with three different and desperate women."

I could tell he didn't entirely like my augmentation of his plan, but I could also see through his cloudy, bulging eyes, that his drunk brain was trying to process all this.  After a few moments, and some agreeing head-shakes, he gave a "That could work."

I assume this conversation is done now and fully expect to go eat a whole watermelon or whatever it is I do by myself.

This crazy bastard is balls-to-the-wall serious.

After some laughing and polite dismissal I walk away to go play a Taylor Swift song on piano or whatever it is I do by myself.

For multiple encounters after this though, whenever I'd see F.B., he'd ask, "So, you think about it more?"

I completely get why people liked hanging out in K-Town for the night.  It's one of the most unique pockets of LA, and can be totally fun in small enough doses.  Now that I've spent about a year-and-a-half living in a more respectable location, I can appreciate K-Town from a "tourist" perspective.

But living there is a different beast.

I moved out of K-Town probably about 6 months after F.B. and I's first conversation about the sex scheme.

I didn't tell any of my neighbors.  I just left. 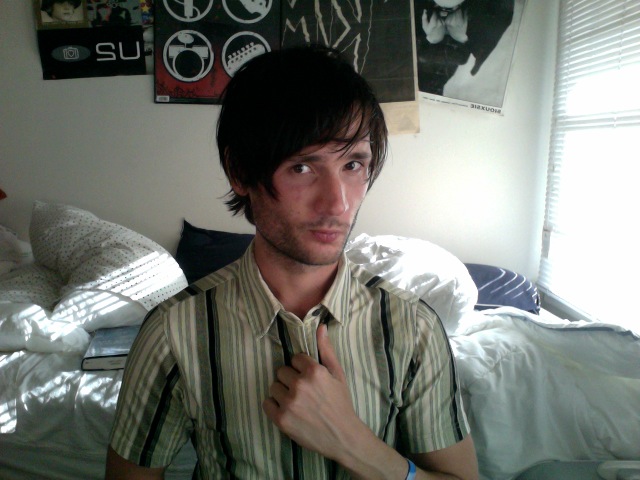 Stephen Gillikin currently lives in Atwater Village.  A recent recipient of the Mega Millions contest, he is also single and searching for love.